After two years of law school and four years in sales, Andy Ulven decided “hot metal” was in his blood, and that he wanted to control his own destiny. In 1971, Andy and his wife, Diane, purchased Molalla Iron Works with $3,000 from her savings account; the start of Ulven Forging. Located in Molalla, Oregon it was a two-man operation producing low volume products, mostly pins and repair parts, on a 500 pound Little Giant trip hammer. As a custom open die shop, they filled the one and two-item orders that larger companies turned away. Order by order Ulven Forging earned a reputation for on-time delivery, quality products, and fair prices. In 1973 operations were moved to a location outside of Hubbard, Oregon that had housed a 13,000 square foot facility on four acres; originally a brick and tile factory back in the late 1920s and early 1930s. 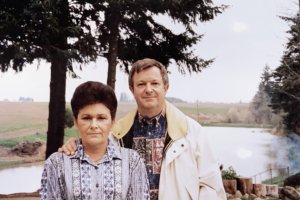 From its open die forging roots, Ulven Forging has expanded its capabilities to include closed die hammer forging, press forging, upset forging, and precision machining. Today they are known to be one of the most versatile forge shops in the U.S.

In 1986, after several years of talks and negotiations, Andy and Diane purchased the assets of Skookum/Rope Master from DRH-Johnson. Skookum was established in Portland, Oregon in 1890 as Columbia Engineering Works and manufactured boilers, wigwam burners, and other items for the area’s loggers and sawmills. They began repairing damaged logging blocks as a side business, and loggers would request to have them strengthened and beefed up – “make them Skookum”. The transition from repairing to the complete manufacturing of blocks for logging use quickly followed. In the early 1920s, the name was officially changed to The Skookum Company. Today, while continuing to serve the timber industry, Skookum also serves customers in defense, oil & gas, transportation, infrastructure, commercial fishing, maritime, and general rigging industries. In addition to products developed by Skookum over the years, they manufacture well-known product lines developed by companies they have acquired.

When the need for quality castings was expressed by Ulven’s existing customer base, Ulven took them seriously and acquired the necessary equipment to establish Wolf Steel Foundry. In 1989 Wolf poured its first heat of steel and has continued to grow ever since. Wolf serves customers in oil & gas, defense, infrastructure, recreation, food processing, pump manufacturing, and several other industries. In 2013 they embarked on an expansion project that doubled their capacity.

In 1995 Ulven Forging teamed with Brookway Machining, a CNC machine shop, to provide forged and machined cross brace latticework for the renovation of the Brooklyn Bridge. After the successful completion of this project, Ulven purchased Brookway, which added CNC Machining capabilities to their portfolio. This acquisition was instrumental in Ulven’s growth because it allowed them to bring in-house what had become one of their key strengths, the ability to provide precision machined turnkey forgings and castings that meet customer specifications.

In 1996 Houston Structures was incorporated to acquire the assets of STX Structures in Houston, Texas. Ulven Forging and Wolf Steel had been supplying forgings and castings to STX for years, making this a natural acquisition. Houston Structures’ primary focus is on infrastructure projects that use wire rope and bridge strand assemblies, such as suspension bridges, stadiums, towers, and dams. In 2003 Houston Structures was moved to the same facility as the other Ulven companies. This move created a closer working relationship with the other companies and enhanced their ability to develop practical solutions to complex projects.

In 1998 Ulven purchased Hale Iron Works, a company founded by the Hale family in Rossville, Georgia in 1930. They were a well-known manufacturer of oblong master links and pear-shaped links for the rigging industry and of other small forgings. They continued to operate in Georgia until 2011 when the equipment and inventories were moved to Oregon and incorporated into the other Ulven companies. The Hale Iron Works product line has been integrated into Skookum’s product line and can be found in the Skookum catalog.

In October 2013 Skookum acquired the brand name and all intellectual property for the SOWA line of oil field blocks, hooks, and shackles. SOWA was founded as a general blacksmith shop in Woodburn, Oregon in 1898, and became a leader in oil field products in the 1980s. The SOWA name is synonymous with quality and service, and this tradition continues under Skookum. The addition of the SOWA line, coupled with Skookum’s state-of-the-art engineering and manufacturing, brings a world-class line of oil field products to market from a single source. In 2018, Skookum launched its own line of oil field elevator links.

While Ulven Aerospace & Precision Solutions has history as an Ulven Forging division dating back to the 1995 acquisition of Brookway Machining, UAPS became a standalone subsidiary in 2019. UAPS is ITAR registered, AS9100D certified, and operates in a separate facility from The Ulven Companies. The breakout of UAPS allows it to focus on supporting the demands and requirements of aerospace and other industries requiring precision machined kits, mechanical assemblies, and subassemblies.

From that single hammer operation in Molalla, the Ulven companies have grown steadily and now occupy nearly 160,000 square feet of building on 34 acres. Today the Ulven team maintains a strong belief and commitment to partnering with industry and customers to provide turnkey products and solutions.